I can hardly believe it has been over a month since I last wrote.  At first nausea and pure exhaustion were hindering my will and desire to write.  Then we got busy with wedding planning and last…  Well, I’ll get to that.

I’ll share the positive first.  Dave and I were married this past Saturday, March 31.  Our small ceremony at home turned into a bit larger celebration at a reception hall during the planning process, and we had about 70 people attend.  It was a beautiful day that will be remembered by us both for the rest of our lives. 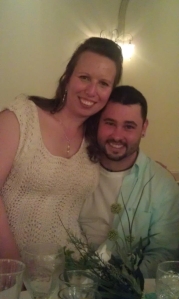 Dave and I on our wedding day

We both had to get back to work Monday morning, and I was asked numerous times if I had been drunk the whole day of the wedding.  While I can’t deny that I had my share of drinks at the reception, at no point was I intoxicated.  I was just intoxingly happy.  And so was Dave.  And it was WONDERFUL.If you’ve read previous posts, I’ve probably got you concerned right now, thinking something like…  “WHAT!?  She’s pregnant and she was DRINKING!?!”  Unfortunately, that was another change since the last time I posted.

In mid-March, Dave and I went to the OB-GYN for our eight-week ultrasound.  We were incredibly excited to see our baby, hear its heartbeat, and know it was healthy.  Unfortunately, God has/had other plans for us.  While the ultrasound tech found the sac, it was empty.  I had what is referred to as a blighted ovum.  What it means basically is that the sperm and egg did not fully do what they were supposed to do, and the pregnancy terminated itself early on.  While the embryo did not develop, the sac continued to grow, causing my hormone levels to go up and all the pregnancy symptoms to show themselves.  Without the ultrasound there was no way for even the doctor to know that the pregnancy wasn’t a good one.

We had a double-check ultra sound a week later, and that ultrasound showed the same thing.  With just over a week left before the wedding, we had a difficult decision to make.  Did we wait for my body to realize there was nothing there?  Or did we get a D&C and remove the risk of miscarrying on our wedding day?  We decided to go with the D&C.  So, with five days left until the wedding, I had a D&C last Tuesday.  Dave has been incredibly supportive, and despite the pain we both felt (emotionally for both of us and physically for me), our love and committment to each other has remained as strong as it was before, if not stronger.

Following the D&C, it was the doctor’s recommendation that I proceed with the LEEP procedure as soon as possible.  This upcoming Monday the pre-cancerous cells will be removed from my cervix, hopefully for good.

I have said it before, however I can’t remember if it was before or after I moved my blog to WordPress, and I’ll say it again, that it is important for EVERY woman to visit her gynocologist regularly, if for no other reason than for her yearly PAP smear.  Women, please read and follow my advice.  If you don’t have an appointment scheduled for your yearly exam, make one.  Now.  You owe it to yourself and all the people who love you.